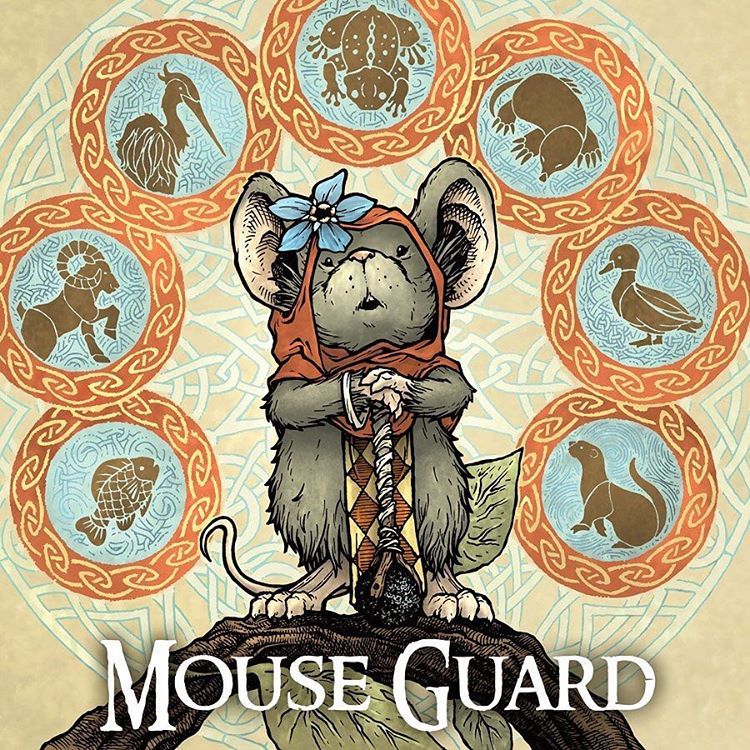 That’s the big picture. You can structure your games in exactly this way now. However, some more interesting details lie in the prep and encounter procedures.

In Mouse Guard, there are four encounter types, and the GM is supposed to pick two, each of different types. These are:

You’ll replace this list with one appropriate to your campaign.

In Mouse Guard, if the skill check equivalent fails to overcome the encounter, the procedure is to advance the adventure in one of two ways:

Twists are supposed to use one of the encounter types you’ve not used yet.

Mouse Guard has this thing where if, during the mission, you intentionally hamper yourself, you get currency to spend on playtime for yourself during the “free play” section.

I strongly dislike this design.

As an alternative, I say:

This conversion removes all the mechanical interplay that Mouse Guard uses (needing to use your traits against yourself to get chances to heal conditions during the player’s turn, etc.). But I don’t think that’s very important.

I ran a 4e thieves guild game a while back called Curators. Here’s how that conversion might look.

Let’s say I prep a bread and butter thieves guild mission: a heist.

I’ll need to invent the place and the prize: the Nentir Manuscript, currently held at Tondown Abbey.

Next, the encounters. I’ll choose Traps for my first one and Monsters for my second. I imagine the abbey has its basement stuffed with statues, half of which are trapped in some way. For monsters, let’s say the manuscript is high on a pillar in the very depths of the catacombs-basement, with holy zombies circumambulating.

I could pick twist options ahead of time but will choose to improvise those as needed.

To actually run the encounters, you can follow Mouse Guard’s lead and just treat them as skill checks, or you can run them however you normally would in your system of choice. The point of using MG’s structure is to make prep quick, easy, and focused. This has certain downsides, but them’s the grits.

Let’s walk through the encounters.

I narrate (or ask the players) how they get into the basement of the abbey. I don’t have encounters for anywhere else in the abbey; so we elide that bit. Same with the escape—I could have saved an encounter for on the way out, but I didn’t. So that won’t be an issue. (The players don’t know this; you don’t tell them the encounters ahead of time.)

Then I present the trapped area: a hall longer than you can see with your torches, with statues of saints, angels, and demons crowded onto every surface, some half buried in the walls, some emerging up from the floor as if taking a breath of air. It’s obviously a trap. What do you do?

If I’m running this in standard D&D mode, I need to have prepared the trap mechanisms, see if any of those are triggered by the actions of the players, and so forth, until they make it through or give up or die.

If it’s Mouse Guard mode, they tell me what they’re doing; they tell me the skill that makes sense to check for it, and they roll against a DC I set. On a hit, they’re through.

On a miss, I have the two options: twist, or success at a cost.

Success at a cost is easy here: you get through but have a couple arrows in you.

A twist could be stealth: perhaps a trap drops you through a chute and into a mazy warehouse filled with the abbey’s guards. And on a failure here we would just do success with a condition: injured in fighting, or the place is on alert.

Another twist could be gangs: as you’re disarming the traps, a patrol spots you and engages in combat.

However the encounter resolved, narrate or cut to the next planned encounter, the zombie-surrounded pillar that holds the manuscript.

Run it in much the same way, and then the characters are off. A nice success at a cost here would be that they get the manuscript but are seen on the way out. Now the abbey knows who stole from them. Future missions might involve dealing with that fallout.

Mission status: complete. I say what it’s like when they return; I hand out any XP or whatever; we might record some incidents treasure they grabbed along the way (random table would be nice for this).

Then it’s the player’s turn. Between missions, what are they doing? Ask each player in turn; resolve any conflicts; and end with a final image, perhaps a teaser of what’s to come next mission.

As you may surmise, doing things in this way could get you through a “session” or a full cycle of play in an hour or less. This is because it’s not complex.