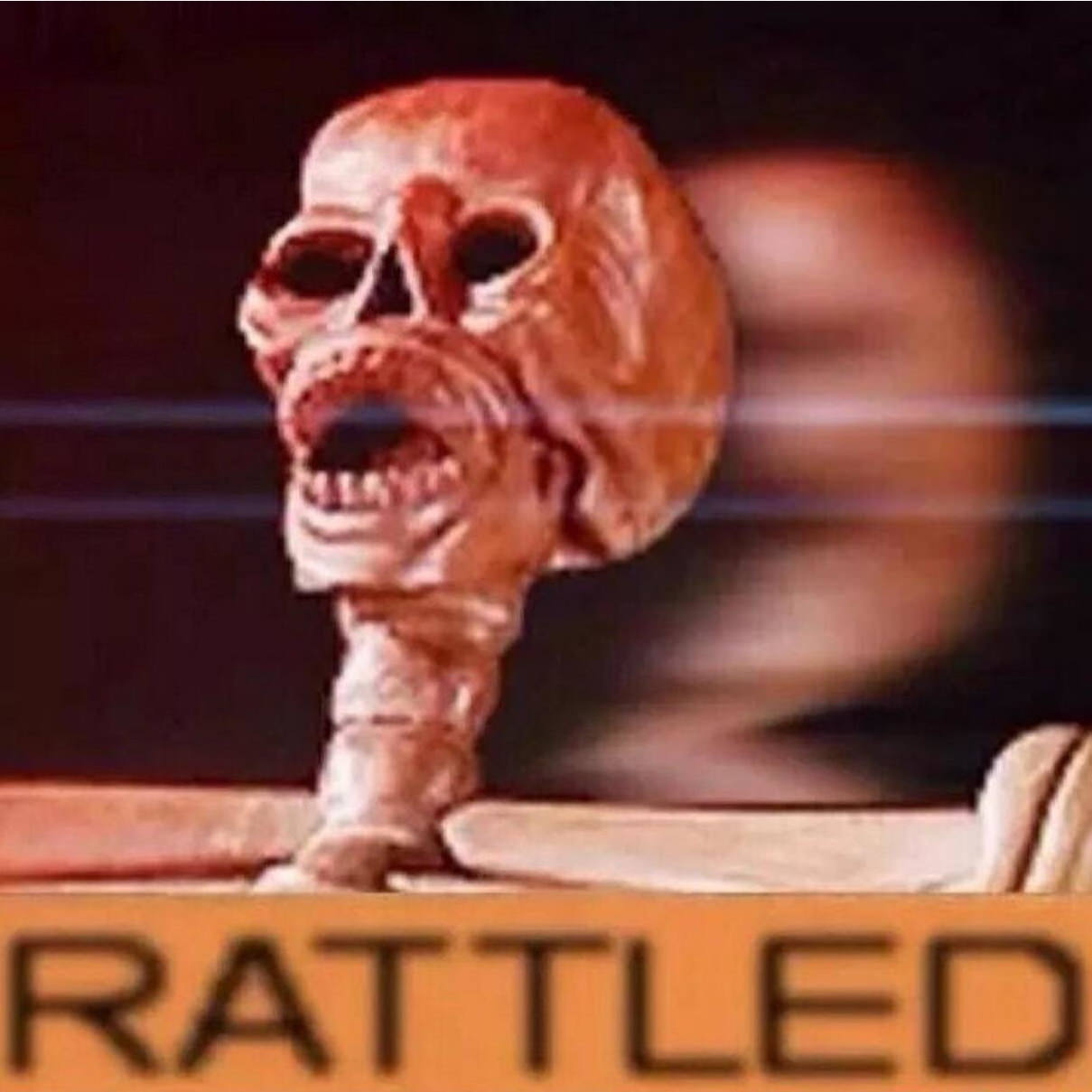 Version 1 is going to have broken links and be a bit rough. But I believe in you. 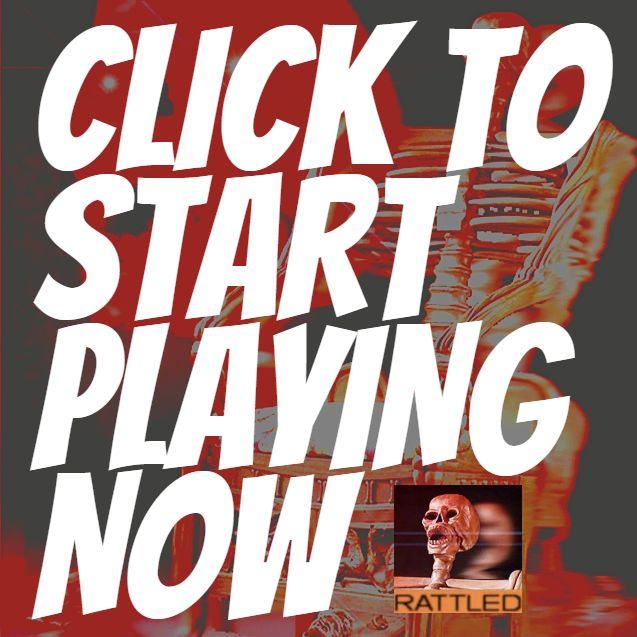 Click on the images to go to the main generators & resources.

You can listen to an actual play of it at gg no re.

You can play it with whatever system you want. The default is 5e D&D because I’m a corporate shill (and it’s free for players and the ref). But come on, it’s all the same.

Print out all this stuff:

The PCs are newly freed skeletons, but adventurers are already in the dungeon! And someone’s going to be the new SKELETON LORD. Deal with those things right now. Later, try to remember  who you were, and figure out how the skeletons should deal with the outside world, i.e., how will the SKELETON WAR go?

OBJECTS OF THE GAME

Player Object: make your story happen. That is, through play, attempt to bring your developing vision of your character’s story to fruition. You may fail, say, if your character dies before completing the goals you have in mind for him; or you may succeed, if you get what you wanted for your character. What you want for you character is not static; it may change as you encounter unexpected events through play. You will be constantly reevaluating how well you are playing in this regard.

Read this part to the players.

So saith THE NECROMANCER as he gasps his last.

There’s an arrow in his back. Blood pools about your metatarsals.

THE ADVENTURERS will be here soon.

Have a Skeleton PC for each player. To make a PC Skeleton, print a RATTLED character sheet. Then either use the generator below or consult the Manual PC Generation Appendix.

Grab a mini & battle mat. This is a game “playable with paper and pencil and miniature figures.”

Everyone should have a 💀 PC now. Read this to the players:

The ETCHED SKULL that the NECROMANCER used to keep you ever-reanimated lies by his corpse. It is slick with his blood.

Whoever seizes and holds the ETCHED SKULL will become SKELETON LORD and command your LEGION.

Make a Strength (Athletics) check, and we’ll see how many others are vying for it against you.

Is there a tie on the highest check? If so, read:

Whoever tied for the highest is grasping the skull and struggling for it against the others.

The other Skeletons watch in the total darkness of the throne room.

All who tied, make Strength (Athletics) checks until there’s a winner.

The winner takes his place on the BONE THRONE, holding the ETCHED SKULL.

Now, form the phalanx and hear your rank assignments.

Here you will assign initial ranks in the Skeleton Army.

Make sure you write your current rank on your character sheet.

Now, bring out the Dungeon Map.

Play begins in Area B, in the location labeled START.

Bring out the Downtime Actions sheet and read this:

This is the downtime phase of play.

The pressing issue is the Adventurers who killed Necromancer. They are in your dungeon, somewhere. Your memories of this place are vague.

Henceforth, you’ll be reactive to the actions of the players. Use the Referee Dashboard to keep yourself organized.

Pay attention to when certain things happen and respond accordingly.

THE STRUCTURE OF PLAY

Your object is to make the setting ever more compelling.

Waste a Location. When the party takes this action:

Generate it. Generate the hostiles per the CR of the location.

Play out the fight. This is the deciding skirmish in the battle; assume they have been fighting for some time already.

Retreat. Treasonous! Wisdom check vs self to be able to retreat.

Success. Roll on the treasure table per the CR of the location to get the drops. (Make sure you’re using the hoard generator, not the individual.)

Further Encounters. You may add additional areas. Repeat process above. The victory is not decisive until all areas are cleansed.

For every 100 GP recovered, the players decide how to build the dungeon (choose one):

When there’s a lull or in reaction to a failed check, pick one.

The point of Encounters is to see if the PCs change. That’s drama. After you set up each encounter, ask How do you react? Resolve their actions, and bring a relevant Encounter when appropriate.

The party sees evidence of a hostile force. Determine what it is and where they are; then give a hint to the players: material objects, a view, footsteps, carcasses. Write the specifics on a notecard and reserve for later fights.

Ideally escalates a Hostiles encounter. Generate the encounter; set up the terrain, and follow the Skeleton War rules.

The Skeleton Lord commands PCs to Scout or Waste a Location or engage in a particular Mission (q.v.).

Advance a Plot. The next logical step will happen.

Trigger the PC Downtime action Remember for any PC.

A PC witnesses evidence of intent to desert or actual desertion.

An NPC acts against the interests of the Army, a PC, or an NPC due to misunderstanding, prejudice, or illusion.

Plots are not foregone conclusions; they are opportunities.

Bring in a Plot as an Encounter. A Plot advances the agenda of something that threatens:

The Skeleton Lord’s incompetence or the potency of the enemy is no accident at all. Reasons: love, enthrallment, nihilism.

Introduce a necromancer who wishes to add to the numbers of the Skeleton Army but not keep the Skeletons under his command. Doubtful all in the Army will accept. Paranoia likely.

A necromancer appears, with or without an army, perhaps pretending to be beneficent, but in reality seeking control.

The Holy Inquisition is making sorties from the Holy City to root out all undead and necromancy in the region.

A powerful chivalrous knight and his retinue is on a personal mission to cleanse the region of undead. But he is a mere man.

An influential Skeleton in the Legion begins working signs and proclaiming a divine purpose for the Legion. Dubious.

The Skeleton Lord may have more complicated objects.

The Lord commands you move against a known Location.

The Lord commands you to scout out a Location. This is the same as the Scout Downtime Action.

Return [an important figure] to the dungeon.

SPOOK the inhabitants away from an area to obtain its (perhaps magical?) resources. The inhabitants are too strong for you to cleanse right now; and thus we are pressed to this extremity.

Make an alliance with the inhabitants of a Location for mutual benefit in defense or offense against another Location’s denizens.

Take a location and construct a shrine or arcanum there.

Lead a scouting party to scope out settlements and lairs.

Something now stirs memory. In the past, what are you doing?

For encounters and treasure https://donjon.bin.sh/5e/random/

Find the point where things could go wrong, and make an appropriate ability check there.

Finally, take a moment to imagine what it looks like when you first gain these powers and the circumstances in which you gain them. Brainstorm and reveal what you have in mind.

Advance as a fighter.

Phylactery. Even if your spine is destroyed, you’ll reform at midnight if the phylactery is not destroyed. Detail it.

Cantrips. Each time you level, gain or replace a spooky/holy cantrip. You can have a number of cantrips equal to your proficiency bonus.

Feats. Your feats are spooky/holy spells.

You gain a spiked wheel.

You gain a huge bone weapon. You’re proficient. It does d12 damage plus double your Strength modifier. Detail the weapon.

Your bones grow thin and sharp. You can shoot your bones as projectiles (d4).

You’ve been burned. You consequently have a fire breath weapon. The default effects:

You spend actions to boost the effects:

For each boost the actions you spend gives you, you can:

You’re wrapped in grave clothes. You have expertise (double proficiency) in Stealth and have Sneak Attack (+d4) damage when an ally is adjacent to your target or if you have advantage vs the target.

You emit a black miasma from your skull. Enemies adjacent to you are cursed, suffering disadvantage to act against you.

Grow 2 feet, gain 2 hp, and do 2 more damage on Strength based attacks.

The object of the game is to make your story happen.

By acting in game, make the things you want to happen happen. You win if things go as you’d like; you lose if they don’t.

How to Know What Your Story Is

Look at your Traits, Ideals, Flaws, and Bonds. This is your character now. Think about how he might change, or refuse to change. Act accordingly. Reevaluate. Repeat.

To act against a Trait, Ideal, Flaw, or Bond requires a Wisdom check vs self. On a success, you can change that part of your PC.

How to Get Stronger

Rank Up. Increase your rank in the Skeleton Army. Each time you do, you get ¼ of the XP needed to hit your next level.

Waste a Location. XP (divided) for kills, whenever, wherever.

+1 Calcium when you succeed on an ability check between fights.

Between skirmishes with the skeleton army:

Check here when you level up: Advancement.

See below for the various location types. Roll for the CR of each and generate the monsters and treasure accordingly.

An unsuspecting settlement, ill-guarded and poor.

Else. Party Surprised. Crossbowmen at the ready. Barriers. Dogs.

A walled settlement with basic institutions.

A cave or dungeon infested with chaos.

Object of the Game (Ref)

Make the setting ever more compelling.

Object of the Game (Player)

Structure of the Game 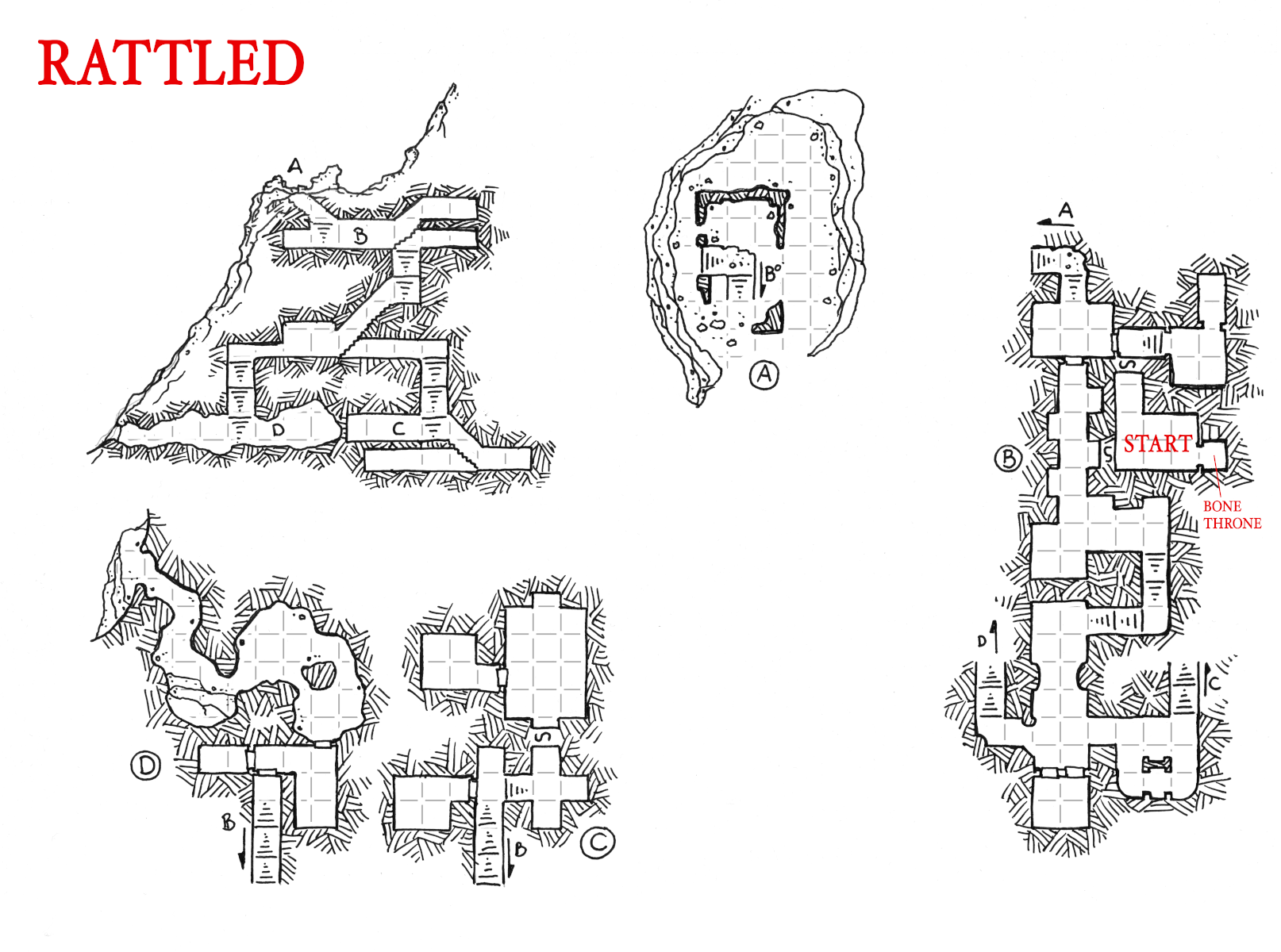 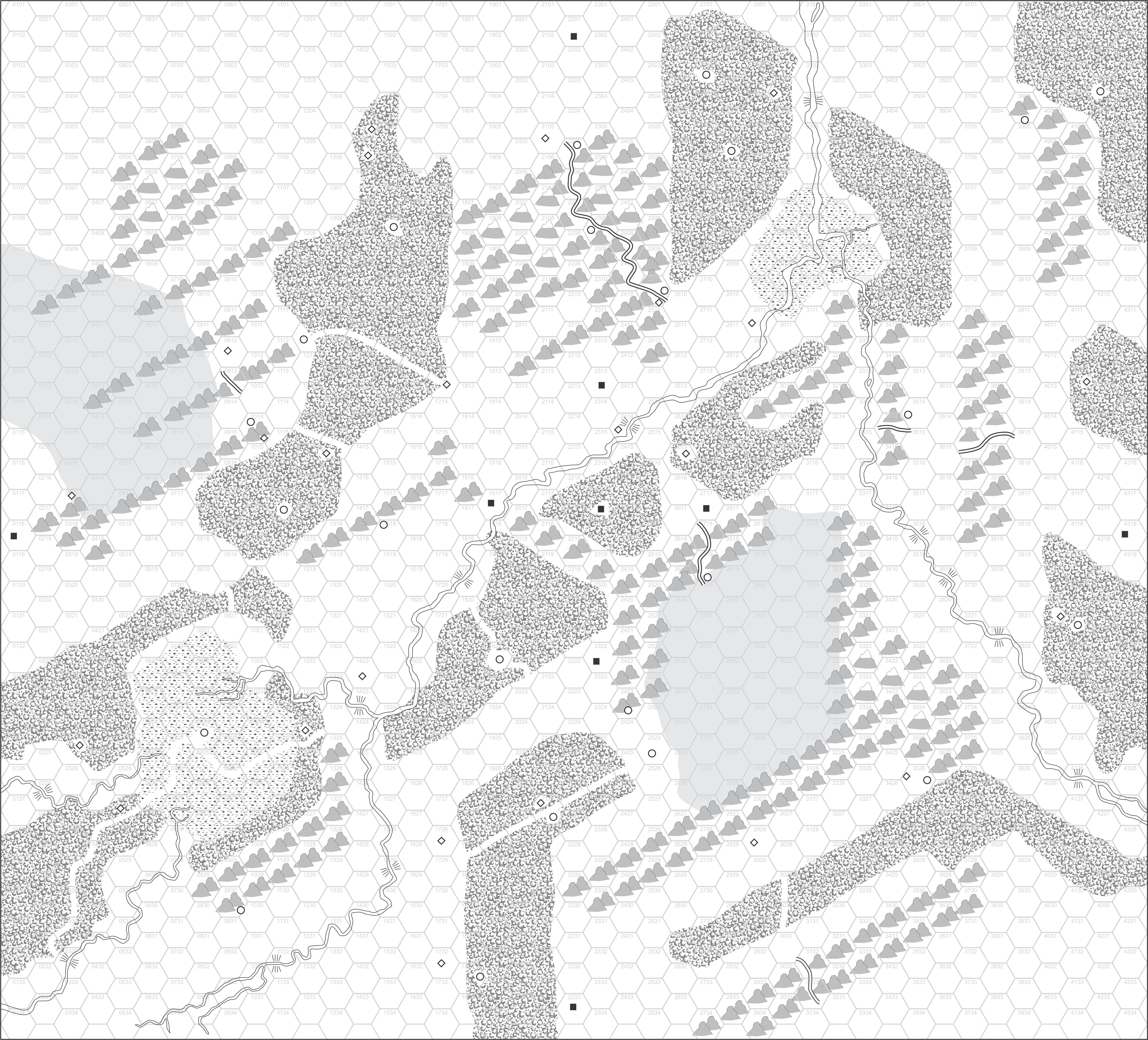 When you advance in rank, +¼ of the XP needed to level.

Lord over multiple Legions. There’s no emperor to start.

Commander of the Legion. Play starts with figuring out who will be the lord of your Legion, which starts with a single Century.

2nd in command of the Legion.

3rd in command of the Legion, in charge of training and order.

Commander of the Century. Your Legion starts with one Century.

2nd in command of the Century.

Bearer of the Century standard (detail). Always on front line, at the far right. If standard is captured, level up upon recapture.

Watch commander of the Century. DOOT DOOT that trumpet.

Commander of a unit of up to 10 Skeletons. Effectively the party.

This is the alternative to the random PC generator.

Rattled. Unless your spine is broken, you’ll eventually reform.

Rank. Get XP when you rank up in the Skeleton Army.

Arise, Kill, & Eat. You get hp back from eating sentient beings.

The Skeleton War Must Cleanse All Flesh; Order; Rank

A human concern or value and/or an insubordinate belief

A skeleton you had unfinished business with before death

Here are the 5e & OSR stats for a Skeleton if you need them. Full statblock, followed by one liners.

Make one by hand. Full statblock, with 5e/OSR one-liners after.

Add these tags as you wish to make the NPC Skeleton distinct:

I’ve actually run this. It’s pretty fun. As I think of topics I want to comment upon further, I’ll list them below.

The exact rules I’ve left somewhat vague. For instance, upgrading a trap. I assume all traps start at d4 damage, and each upgrade increases the damage die, or else adds a save vs element.

Bat in the Attic. The overland map I used.

pdimens. The character sheet I used.